PLEASE NOTE: HAT KID, BOW KID, AND MUSTACHE GIRL ARE NOT DATING ROUTES IN THIS GAME. THEY ARE SUPPORTING SIDE CHARACTERS.

Would you smooch a ghost? How about a feline chef? A nautical walrus? A disco penguin or strange movie director bird? Or maybe a leader of the mafia is more your style? Or maybe you just want to befriend them?

Good news, you can do all these things! Welcome to A Date in Time, a fangame based around dating and/or befriending several of the kooky and colorful characters from A Hat in Time!

You, the player, will have to use your brains, brawn, and charm to win over these fun characters, but you won't go it alone! With you are some friends, here to help!

Hat Kid, Bow Kid, and Mustache Girl are here to help you by providing special choices in events, teaching you valuable tips, and, most importantly, helping you have fun!

Be sure to have a zip file opener! This comes as a .zip file, so I recommend Bandizip or Unarchiver. Those are free and they work well.

This is my new favorite thing made by fans. I love how you guys included subcon masked, Vanessa's 3rd floor, and moonjumper! I also like the decisions you shouldn't make like barging into snatcher's house and T-posing or telling the mafia boss that you're old man Jenkins, All of the art is amazing and I can tell you put a lot of effort into this game! I can't wait for updates!

This was such a neat little game! I really enjoyed going through everything and I absolutely loved all the little memes that were scattered throughout. I still can't get over the mwister oboma one. Also I actually got chills in the manor section. This was such a lovely little game to help pass the time during quarantine! Thank you!

Heyyy, this is pretty cool so far! I'm very excited for updates and, hopefully, completion!

So far, the story is really engaging and entertaining and I had lots of fun reading it! The characters are portrayed very nicely, especially for a fan game, so that was really cool! Also Bow Kid is the most precious little child and I will protect her with my life.
The character sprites were sometimes a little distracting since they're so stylistically different from the backgrounds, but they were all decently drawn and I don't really have too many complaints about them. Oh- and speaking of the backgrounds, I really love how well they were drawn! It seriously felt like I was in dead bird studio when I saw the reception place, or in hat kid's ship during the beginning!
I also gotta say, I really like the idea of the badge salesman being used as a game mechanic. I've always felt like visual novels were difficult and tedious to navigate after making a mistake or just wanting to get a different ending and what not- so this is a really nice idea, especially for casual players like me. I also really liked the UI. It was very easy to navigate and it was well laid out!
My only real complaint is that I wish there was more to play. I'm totally hooked, and I'm super excited to see where this goes! So far I haven't really experienced any issues or bugs. I guess if there's one thing I could say it's that some of the music is a bit distracting but it's really not a problem, I still had tons of fun!

Tl;dr: Game looks great, I love the organization, everyone looks heckin adorable! Thank you and goodnight

Same! I'm on Windows, and when I try to open the file, it just says: "Windows cannot open this file." Maybe when this game is finished, they can fix that?

Little problem, when I try to access the file, it says “you do not have permission to view this file” Help?

me and my boyfriend just spent a few hours playing this together and honestly its really fun and the story is so good, the characters feel just right and its overall amazing! cant wait for the full release. great job to everyone who has put in effort so far!

The game is pretty good, but since the game is still in development, i would suggest fixing the grammar in some places. and the different art styles is a little jarring to look at which kinda clashes with everything else with the game so sticking to one style would be good. But overall the game was pretty good.

This game is amazing! Moonjumper easter egg is awesome! ....I died because I thought it's impolite to refuse to eat food he prepared for me, even if ir's poisoned mafia steak, lol.

Hi! I really like the game, but I have an issue:

I am on a chromebook laptop, and it appears I am unable to access the game, I am able to download it, but I can't open it in the files, If you have any suggestions as to how to open it, I am open to any.

I know that chrome books have issues with zip files, and it is impossible to open, along with games on Steam...(I just wanted to mention)

Is the full game gonna be released soon??

I just found this game and I fricking love it! I can't wait for the full product!  I love the Snatchers route the best at the moment.

Hello! I really enjoy the work so far and am looking forward to any future updates! The models are also very well done! <3

I don't want to seem impatient and/or pushy. But I'm just wondering, what are the estimated times of future updates/patches?

this is what i'm here for.

this is gods work.

Can you add this to Amazon and/or android (sorry for any spelling mistakes/errors)?

yes, just, YES. y’all are going great! i absolutely loved the dialogue and the music made it better! this fan-game SHOULD be sold cause man, did you put a lotta effort into it! the art compliments the backgrounds well, and with the dialogue sprinkled on-top it felt great to play through! if y’all need a pixel artist, or just an artist in general, I’m hella down! hope that aDiT gets more recognition! (’^ v ^)

I Absolutely LOVE This Game. I Saw A Let's Play And Didn't Even Watch A Second Of The Vid Until I Played This Game. I'd Love To See More To This.

Lately i just randomly stumble upon this fangame and this fangame is actually way better than i expected. Im looking forward to see more updates. Keep up the amazing work!

I noticed during my playthroughs that the "progress" bar would sometimes shift its marker off the left edge (probably because I got negative points with whoever it concerned). If you haven't already fixed/changed this, may I suggest having the marker start in the center, and have a label on either side to indicate dislike on one end and love on the other? like this:

I'll have to see if this is possible! The bar is engine-generated and not an asset we can create, (I can only make the frame and the filling texture,) so it might not be doable while having the bar actually work.

Maybe you could set the variable to half of the maximum value at the beginning? That might make the bar start in the middle?

I understand that it could be too much trouble, and otherwise, I think the current version serves its purpose. Thanks for replying, and good luck with the next update

That's a good idea, actually. I don't think it's too pertinent now, since we don't have a maximum point value set in stone yet, but I might go for that later, since it's not at all hard to change in the code.

Awesome! Glad I could help you out with ideas. Maybe I should get a credit in the final game ;)

I think it's the Prince, as well the Snatcher. My theory is that the Prince after being locked up, his soul became two different entity, his half that sorry for what he done to Vanessa is the Moonjumper, while the other half that is despise her became the Snacher

I just wanted to do a flip for the minions... On another note, I can't wait to see how this game progresses!

I love A Hat in Time a lot, and I'm interested in The Conductor tbh.

I just saw this game because my friend showed a screenshot.

I can't wait once the full game is done! I'm so excited!

My friend and I played this as a joke and we absolutely loved it man. One line the Conductor said about his train stuck out to us and we found it so funny I made this terrible thing. Please forgive me, I have sinned. 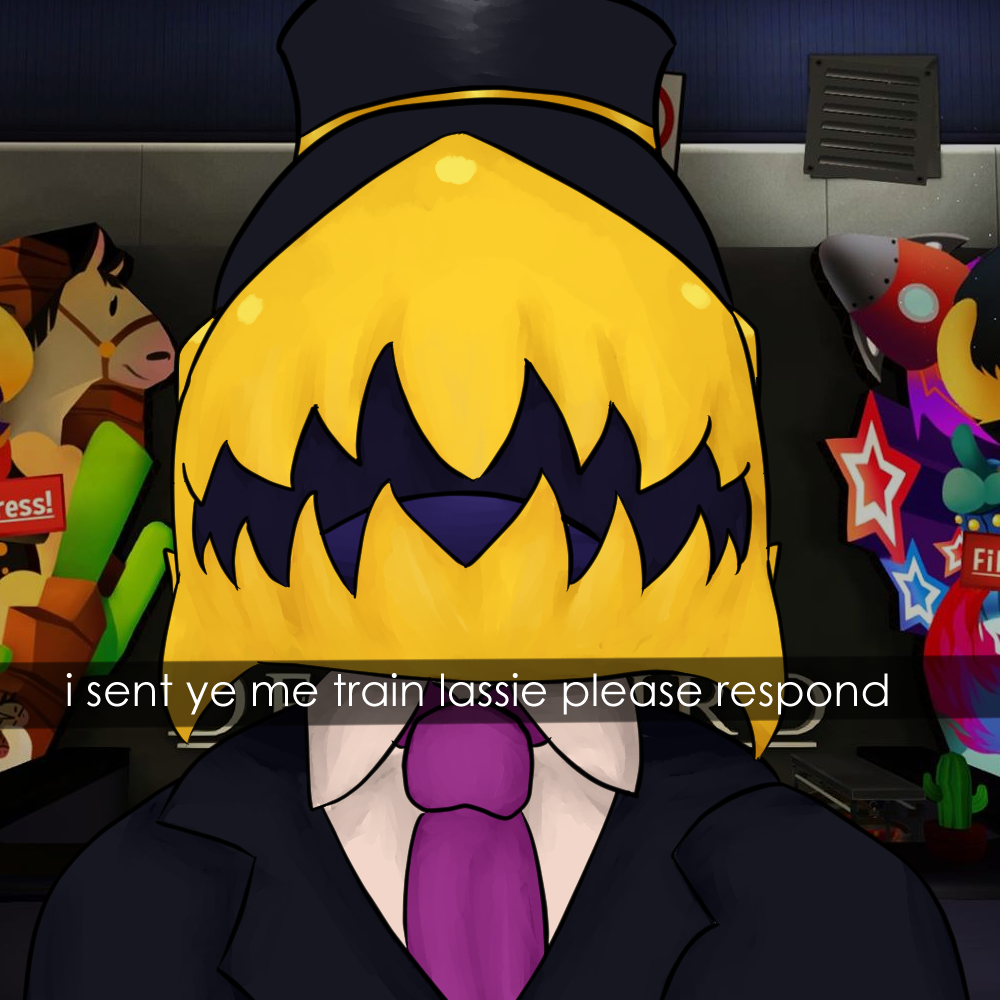 But really, this game was super good and I'm looking forward to more of it :D

I hope you are prepared to face the music for your sins committed here, on this day,.

Do you ever plan on adding voice-acting? If so, I'd really love to be able to help! If you're interested at all, I have a small VA demo reel on my Casting Call Club page here: https://www.castingcall.club/m/LawyerLion

I can do a lot of voice impressions (I'm currently working on a Scottish accent!) for characters and what not. I showcase a lot of the voices I can do in this YouTube video (for lack of any better examples at the moment. The best voices come in at 1:38):

Thank you for your time. I really hope I can be a part of this fun project!
Reply
RamenWarrior339 days ago

dude ur pretty good hope u get to join them!!

The ZIP archive for the Mac version is broken.

i cant open it at all and i did extracted the files but my computer is thinking its a threat , what do i do?

um my laptop cant open this any tips?
edit:nvm got it but dunno how to open the game...

Have you extracted the files? If so, click the A Date in Time application.

If you're using a Linux or Chromebook, unfortunately, it won't run. We haven't configured a Linux build yet but will for our next alpha release, and we can't make a Chromebook build. Our Engine (Ren'py) can't build to that OS, which seems to sadly be common with Chromebooks.

oh thx! will try rn
edit:how do I extract files? sorry I've never needed to do it before
edit 2 (srry):ok so I did it now what? idk how to run it ;-; 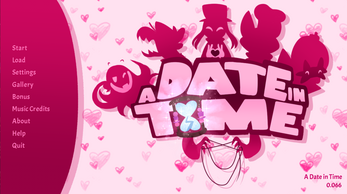 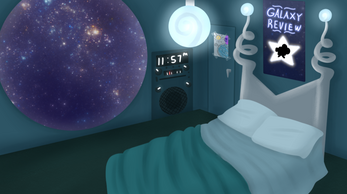 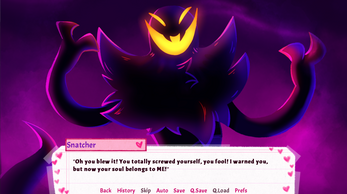 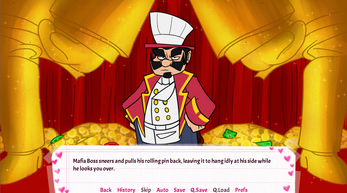